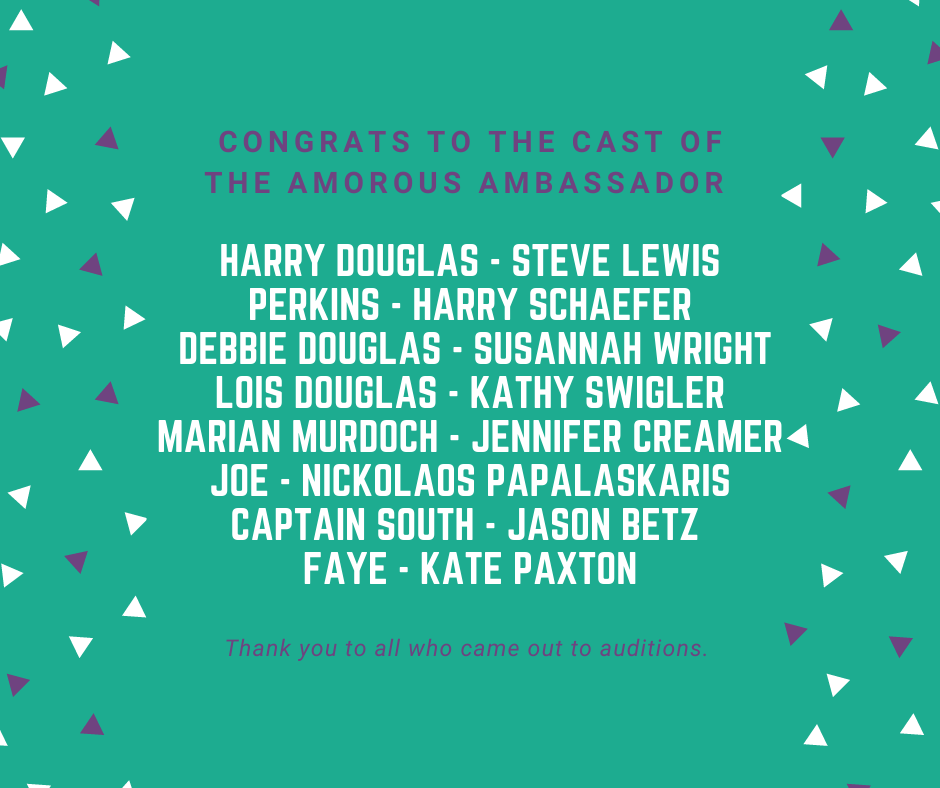 The Amorous Ambassador – AN AMERICAN FARCE
Written By: Michael ParkerPresented By Arrangement with Concord Theatricals on behalf of Samuel French, Inc.Directed By: Babs Umenhofer

“Hormone” Harry Douglas, former US Senator and post-Presidential nomination failure, is back to his old shenanigans, but this time as the American Ambassador to Great Britain. He tells his wife Lois that he has arranged a golf outing in Scotland for the weekend. Lois in turn tells Harry that she too will be gone for the weekend at a spa, and that their daughter Debbie will be gone visiting a girlfriend. Perkins, the newly hired butler in their British country home, is told individually of their plans. He stoically watches as each of them leave for the weekend.
So… Where’s the farce? Harry, secretly returns to the empty house, having planned a romantic rendezvous with a sexy, next-door neighbor Marian. This is no ordinary rendezvous as they plan to act out their fantasies, she a French maid and Harry as Tarzan. Debbie returns with her boyfriend Joe, believing they have the house to themselves for the whole weekend. Harry’s secretary, Faye Baker, and Captain South of the U.S. Marine Corps arrive in the wake of a bomb threat at the embassy, and must set-up embassy communications in Harry’s country home. Captain South places a squad of marines around the perimeter, and everybody is sealed in.

HARRY DOUGLAS (Age 45-65) A former US Senator, post-Presidential nomination failure and now the US Ambassador to Britain. A philanderer and woman chaser, he usually manages to smooth-talk his way out of compromising situations. Suave, elegant, good looking.

PERKINS (Age 50+) The quintessential butler. A pivotal character around who most of the circumstantial humor seems to offer, He remains “Oh so British”, never cracks a smile and always seems to be in control.

JOE (Age 20-30) Joe’s great misfortune is life is that his girlfriend (Debbie) is the Ambassador’s daughter. He is caught up in a whirlwind of events, and never seems to understand how he has got into such a mess. He spends a good portion of the play in a dress and wig, pretending to be Debbie’s girlfriend, Josephine, fighting off the advances of “The Amorous Ambassador.”

CAPTAIN SOUTH (Age 25-45) The Marine Corps officer in charge of embassy security. He is a total incompetent, who spends his time searching for a non-existent “mad bomber”, when he is not being knocked out, hit by doors, etc.

MARIAN (Age 25-40) The Ambassador’s girlfriend from next door, is beautiful, glamorous and sexy. Her costumes range from a cocktail dress, and a French maid’s outfit to lingerie.

FAYE (Age 25-40) The Ambassador’s secretary, is not too bright. She breaks things, she drops things, she is a living, breathing, walking disaster area.

LOIS DOUGLAS (Age 40-60) Harry’s long suffering, matronly wife who manages to turn the tables on him.